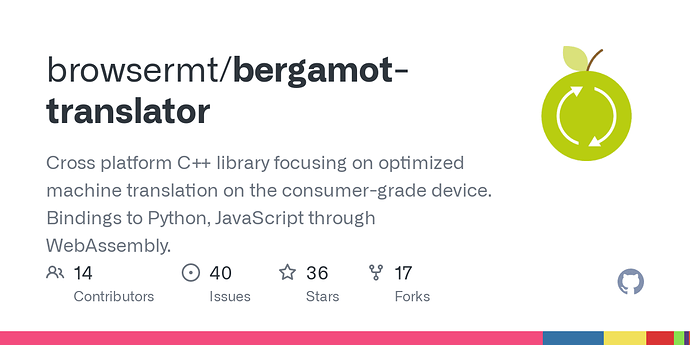 It looks like they’re using Marian NMT which is Microsoft’s open-source translation system amd packaged it with JavaScript bindings as a Firefox extension. Marian NMT models are compatible with CTranslate2, which is the inference engine for Argos Translate.

So one could take models trained for Marian NMT and make them run on argos? This could be interesting, as it might allow us to re-use already trained models (or use the tools built to train those models).

I linked to a demo of doing this directly with CTranslate2 for FairSeq models. CTranslate2 also supports Marian models which works in the same way.

You could package a Marian model converted for CTranslate2 in an Argos Translate package and it would work. The only issue is that Argoa Translate doesn’t currently support adding a prefix to the source text to tell the multilingual model which language to translate to.

The tradeoff with using a pretrained model from Meta or Microsoft is that it’s larger and more powerful but gives users less control and visibility into how it was trained.

CTranslate2 being able to run third-party models is relatively new so I haven’t implemented anything yet but the plan is to support both FairSeq/Marian models and custom models trained with Argos Train.